“None of you guys represent black lives”

This past weekend, there was a black veteran holding the American flag in Portland, Oregon, while telling the protesters, “None of you guys represent black lives.”

Gabriel Johnson, who was an eight-year veteran of the Marines, is tired of the violent protest in the city. That is why he wanted to decorate a barrier surrounding the Mark O. Hatfield Courthouse with the American flag.

“I felt compelled to show my patriotism and to try to bring a different message to the courthouse,” Johnson said.

Johnson’s house is close to the courthouse, which has seen repeated nights of violent protests. Johnson compared the last 50 nights in Portland to his experience in Iraq listening to the explosives and being scared for his life. He believes that violence is not the American way.

Transcribing an interview we just did with a Marine veteran who lives a block away from the Justice Center/Federal Courthouse. He said the violence we’ve seen for more than 50 nights is not #BlackLivesMatter and that something has to change. Compares it to experiences in Iraq: pic.twitter.com/gTGPhMvC60

“My narrative is simply we all need to come together. Man, that’s it. You’re mad at me because I got a flag?” he told a protester.

“If you stand for justice, come here and stand with me,” Johnson yelled at protesters Saturday night in a video posted to social media. “Stand with me because I’m here for justice. I’m not here to tear down this f—ing fence; I’m not here to spray paint. It’s going on every day. If you don’t want to get gassed, stop! If you don’t want to get gassed, stop! It has to stop! None of you guys represent black lives. Sit and protest. Sit and protest.”

What is happening in Portland

The death of George Floyd in Minneapolis on Memorial Day set off a wave of protests against police brutality and racial inequality in a lot of cities across the country, including Portland. 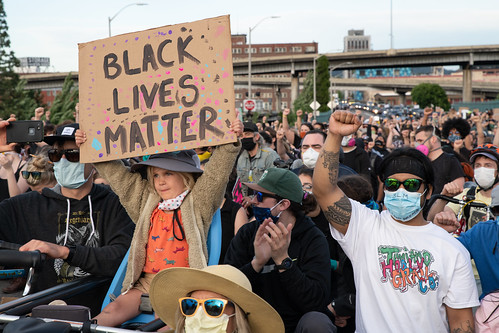 “I support the city; I support the police; I support us coming together because it’s about time,” Johnson told local outlet KOIN. “It’s been 60-plus days of us being out in the street and like, what’s been accomplished?”

President Trump tweeted on Sunday night, “We are trying to help Portland, not hurt it. Their leadership has, for months, lost control of the anarchists and agitators. They are missing in action. We must protect Federal property AND OUR PEOPLE. These were not merely protesters, these are the real deal!”

We are trying to help Portland, not hurt it. Their leadership has, for months, lost control of the anarchists and agitators. They are missing in action. We must protect Federal property, AND OUR PEOPLE. These were not merely protesters, these are the real deal!

The mayor of Portland, Ted Wheeler, has repeatedly said that he does not approve federal law enforcement officials’ presence in the city.

“Well, the president has a complete misunderstanding of cause and effect. What’s happening here is, we have dozens, if not hundreds, of federal troops descending upon our city,” said Wheeler on CNN. “And what they’re doing is, they are sharply escalating the situation. Their presence here is actually leading to more violence and more vandalism. And it’s not helping the situation at all. They’re not wanted here. We haven’t asked them here. In fact, we want them to leave. What we’re seeing is a blatant abuse of police tactics by the federal government, by a Trump administration that’s falling in the polls. And this is a direct threat to our democracy.”