Gun Sales Through the Roof: Good for 2nd Amendment Rights?

According to the latest FBI statistics, there have been more background checks completed last month for firearm purchases than any previous July for which records are available.

“In July 2020, the FBI conducted more than 3.6 million firearm background checks, making it the third-highest month on record for checks since the bureau began keeping statistics in 1998, according to new data released on Monday by the agency,” CNN shared. “By comparison, the bureau conducted just over 2 million checks in July 2019.”

The two other months with the highest number of background checks done were also this year with 3.74 million background checks being processed in March when the pandemic started to impact life in the U.S., and 3.91 million in June, when violent riots and looting began across the nation in response to the death of George Floyd in Minneapolis. A lot of Democrats in various cities across the country have demanded the defunding of police departments, or have defunded police departments already.

According to Fox News, there have been 2.5 million newbie gun buyers so far in 2020 while The Free Beacon reported that there has been “record-setting growth in new gun ownership” in the black community. The 2.5 million number shared by Fox News is likely low given the fact that the statistic was available at the start of June, and June and July ended up finishing as the #1 and #3 all-time months, respectively, for the most background checks processed for guns sales.

The record number of firearms sales in 2020 comes as violent riots have taken over Democrat-controlled cities and images and videos of the violence have often gone viral on social media. Several cities have been hit hard by the violent riots and looting including Portland, Minneapolis, New York City, Atlanta, Chicago, Austin, Seattle.

You need a firearm when your local police have been defunded

“Millions of Americans are discovering how important it is to have the right of self-defense amid the push to defund the police,” Fox News contributor Joey Jones shared on Tuesday. “I’ve been to my local gun store. A good friend of mine, an Army Ranger, owns it and they’re always busy and there is nothing on the shelves. He has over a half a million dollars in inventory on backorder waiting to come in so he can sell it.”

There was a famous instance of firearms being used to protect private property during the riots that happened in St. Louis when leftist activists stormed on to a private street and reportedly threatened Mark and Patricia McCloskey. 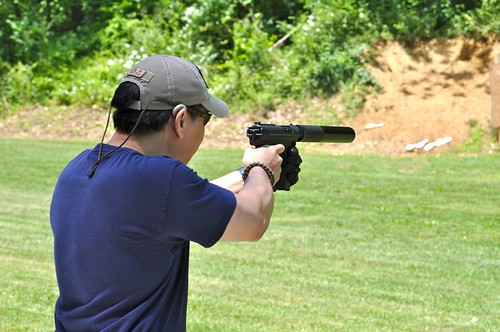 McCloskey continued, “There’s mayhem in the city every night, you never hear about it, there will be dozens of shootings, multiple deaths, no one seems to care about those black lives, but, you know, it’s when there [is] political capital to be made from somebody’s death, that death matters, no other life matters that I can see.”