Are Democrats using Unrest as ‘a Pressure Tactic’ against Voters?

On Monday, Ben Shapiro, host of “The Ben Shapiro Show”, said the rioters in cities across America are practicing a form of “political terrorism,” with Democratic officials supporting it through their response.

“If you are burning cities because you’re trying to apply pressure tactics … then you are in fact engaging in a form of political terrorism,” Shapiro asserted in response to another weekend of lawlessness and unrest. “And for cities to stand by and cave to that is not only the height of irresponsibility, it’s incredibly dangerous and it makes them complicit in this act.”

Shapiro believes that Democrats are “rooting for the chaos” and allowing the destruction of their cities hoping it will destroy President Trump’s re-election chances.

“So why are the Democrats not doing anything about this? Why? All the cities are burning,” Shapiro continued. “The answer is pretty obvious at this point. For a lot of Democrats, they’re willing to wink and nod at this so long as they think it’s a political tool.”

“They believe that a feeling of chaos will drive Trump from office,” Shapiro added. “Trump’s the president, feelings of chaos do not redound to the benefit of a sitting president, and so they are perfectly willing to go along with the chaos. They are rooting for the chaos.”

Tensions and mayhem have increased in some cities since President Trump sent federal agents to stop the riots in Portland, Oregon, that have have been going on for nearly 60 straight days since the May 25 death of George Floyd in Minneapolis police custody. 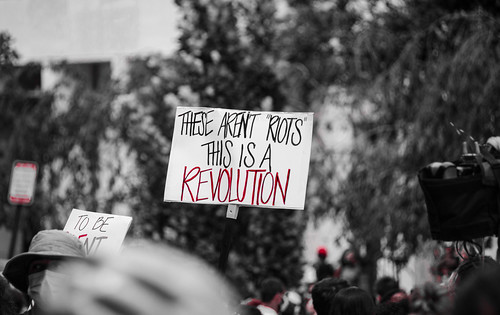 According to the House Speaker Nancy Pelosi, D-Calif., President Trump is responsible for the unrest. Pelosi called Trump “Mr. Make Matters Worse” on CBS’ “Face The Nation” over the weekend.

“Time didn’t begin with Trump,” Shapiro answered to that. “Trump is not the Big Bang of American politics.”

The left is losing the middle

“The day after Joe Biden is elected this all ends. That is my prediction,” Shapiro went on later in the program. “Why? Because all this is is a pressure tactic being applied to law-abiding Americans — which is disgusting.

“It’s horrifying,” he finished, “and that is what you’re watching across the country.”