The Supreme Court on Thursday confirmed the ruling of a lower court deciding that up to 1 million Florida felons who have completed their sentences but have not yet paid outstanding fines, restitution, and other fees are not allowed to vote.

The conservative-majority court declined to reopen and look into a federal appeals court ruling. That decision allowed Florida to stop felons with outstanding court-imposed debt from registering to vote for the primary election. The deadline for the registration is July 20, 2020. 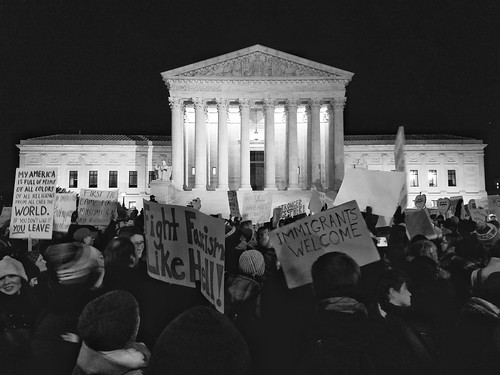 “Live! Protest in front of the US Suprem” (CC BY-NC-ND 2.0) by Geoff Livingston

What is the Dispute About

The dispute is based on a 2018 amendment to Florida’s constitution. That piece of legislation restored voting rights to felony convicts who had completed “all terms” of their sentences.

The state’s legislature and Florida’s highest court interpret the “all terms” part as including payment of all court-imposed costs before voting eligibility is restored. That brought about court challenges.

A good amount of court-indebted felons who had already finished serving their sentences but can’t pay the court fees asked a federal court to strike down the pay requirement on constitutional grounds.

The federal trial court canceled the part about the payment component in May. It ruled that it was unlawful to prohibit voting access based on wealth.

However, the Atlanta-based Court of Appeals for the 11th Circuit held the lower court ruling from applying until the appeal decision is given. The result is the court-indebted felons cannot register to vote or cast ballots.

Consequences of the Supreme Court Decision

Rick Hasen, a law professor at the University of California, Irvine who is also an election law expert, is seeing major implications for both Florida’s upcoming August primary vote as well as the November general election caused by the Supreme Court decision. “This case is perhaps the most consequential when it comes to election outcomes,” he wrote on the Election Law Blog. “Florida is a perennial swing state and the number of voters affected by this ruling is significant.”

In her dissent, Sotomayor said, “this Court’s inaction continues a trend of condoning disfranchisement.”