On Saturday night in Austin, a black motorist was videotaped asking white BLM protesters to stop closing off a highway so he can go to work and provide for his children. The video shows the man getting out of his vehicle on the I-35 and talking to the activists who are refusing to let traffic pass.

The man was trying to go to work

‘I gotta go to work, I’m black! I’ve gotta go to work!’ the unidentified man yells at the group of BLM protesters and waves his hand in the air. ‘I’ve got bills! I’ve got kids! Get the f**k out of my way!’ he kept on yelling before he made his way back to his pick-up truck.

His approach was effective, as they were seen stepping to the sides of the road and letting his car through.

The irony of the situation pushed the video of the incident to quickly go viral on Twitter after it was shared by reporter Savanah Hernandez.

‘A father, whose kid’s lives matter enough to him to confront the crowd on the way to his job to put food on the table. Respect!’ somebody wrote.

Another tense night in Austin

The incident happened at the end of a tense night in Austin, where heavily armed rival groups clashed against each other again after the shooting death of BLM supporter Garrett Foster.

A group of men with guns were seen watching left-wing demonstrators at an interim memorial set up for Garrett Foster early in the evening.

Members of the far-right paramilitary group the Three Percenters were brandishing semiautomatic weapons in an intimidating manner. Members of another far-right group, the Boogaloo Boys, were also seen at the memorial.

The mood at the memorial was tense since the memorial had been destroyed earlier in the week by a right-wing activist who said Foster was a ‘terrorist’ because he was part of BLM, and was, therefore ‘rightfully and legally euthanized.’ 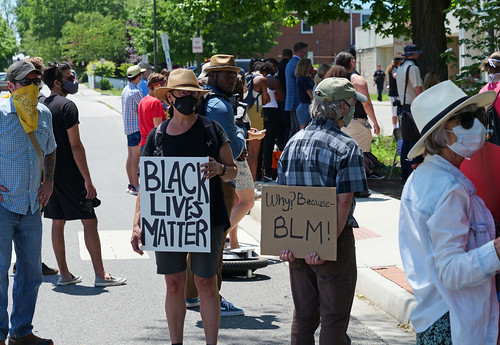 The Austin Police Department feared clashes between groups starting by nightfall and increased their presence accordingly. They called in extra cops and state troopers to help protect both people and property.

‘We are bringing in the necessary staff, and have partnered with other local law enforcement agencies as we have done throughout the past few months, to allow for those peacefully and lawfully practicing their first amendment rights while also working to prevent any violence or destruction of property,’ a statement from the Police Department said.